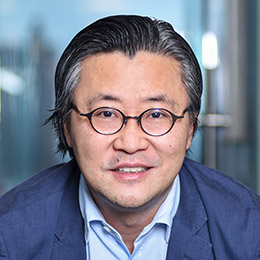 Michael Chung is the CEO of CIG Education Group, a division of CIG. He is also the CEO of BrandEd Holdings, a portfolio company of CIG Education Group, which consists of Sotheby’s Institute of Art, The School of The New York Times, and City Football Leadership Institute. He also serves on the Board of Bach to Rock, which is also a portfolio company of CIG.

During his tenure at CIG, he served as the interim CEO and Board member at Navtech, Inc. and led the turnaround of the company, which was acquired in 2016 by Airbus. He also served on the Board of Directors at ProQuest from 2008 to 2013.

Michael came to CIG from Barr Associates, Inc., the largest independent manufacturer of precision optical components where he served as Chief Operating Officer. Michael implemented company-wide systems and initiatives at Barr to improve operations and accelerate growth. Michael successfully led the execution of the turnaround of Barr from near bankruptcy to a profitable company and subsequently helped execute the sale of Barr in the fall of 2009.

Prior to joining Barr Associates, Michael spent seven years at the Goldman Sachs Group, most recently as Vice President in the Mergers and Acquisitions Department focusing on the technology sector. Over his tenure, Michael worked on numerous M&A and private equity investment transactions across a wide range of industries including information services, telecommunications, high technology, biotech and energy.

Michael enrolled in the Management and Technology Dual Bachelor’s Degree Program at the University of Pennsylvania where he earned a B.S. in Economics with concentrations in Finance and Accounting from The Wharton School and a B.S. in Mechanical Engineering. Michael holds an MBA from Harvard Business School. Michael serves on the Boards of the Korean American Community Foundation and Advancement for Rural Kids. Michael and his wife Hannah live in New York City with their two sons.